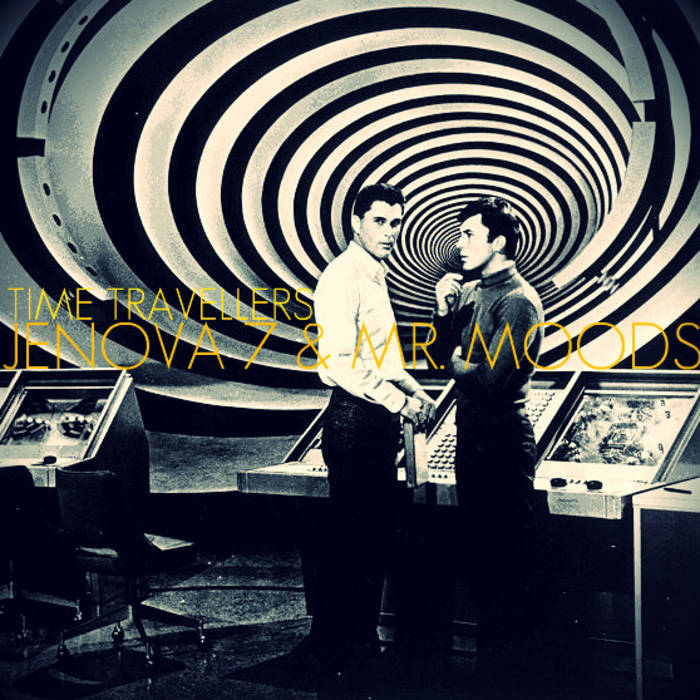 J0ecaca Just can't get enough from this album. Love it!

GEORGE Angeles I FCKN CANT BELIEVE HOW GOOD IS IT . I LOVE MR.MOODS HAVE quite a few HIS ALBUMS.
back to track
the motives - ORIGINAL
the length- Full
the instruments are Lustrous
bass - so slammy
the recording quality - top notch
A-WORK
George score - 8.5/10 ⭐️ Favorite track: Smooth Jazz Backup.

e̴a̴ For sure one of my favourite discovery of 2012! so so good Favorite track: Under The Falling Stars.

"Fancy yourself a fan of the crate-diggin’ ways of early DJ Shadow, DJ Krush, and other artists of that breed? Well, you’re in a huge fucking treat here. Potholes’ own Mallory Pickard hipped me to this joint project from Jenova 7 and Mr. Moods, who on Time Travellers weave together loads of samples to create a jazzy, blunted, and altogether refreshing album. There are bright piano twinkles, dusty-as-hell drums, choice vocal cues, woozy brass stabs, and everything else you would want on here. And the best part? It’s free. Yeah, don’t sleep on this, y’all." - Andrew Martin, Potholes In My Blog (potholesinmyblog.com/jenova-7-mr-moods-time-travellers-album/)

"I was seriously taken aback when I first started listening to "Set The Mood" by Jenova 7 & Mr. Moods. It was like sex had hit my ear as soon as I pressed play. The first half of the song reminded me of something that the late, great Nujabes would have conjured. But I guess that makes sense since Mr. Moods did participate in a Nujabes tribute song. Anyway, I was instantly reeled in. The incorporation of modest ambient and the soft clarinet in the background gave the song the smooth boost it needed to propel this song into great heights.The latter half of the song is where it breaks from that Nujabes style, cue vocals. The vocals are seriously suave, punching your ears with soul and blues. What a dynamic duo. Even though it's two weeks old, it deserves more attention and credit than it currently has. "Set The Mood" is off of Jenova 7 & Mr. Moods' latest album Time Travellers. If you haven't checked it out, what are you waiting for? Get it while it's still hot." - Phillip Yung, Earmilk.com (www.earmilk.com/2012/06/06/jenova-7-mr-moods-set-the-mood/)

"The well-known Dusted Wax Kingdom artists Jenova 7 and Mr. Moods travelled back in time and brought back the grooviest nuggets from forgotten old dusty jazzy records, coming up with a masterpiece collaboration album. Push the play button, light a ciggie, laid back and let the downtempo musical magic unwind the stress." - dustedwax.org (dustedwax.org/dwk137.html)